While I mostly use acupuncture in my treatments, I also incorporate one or more of the following modalities as needed 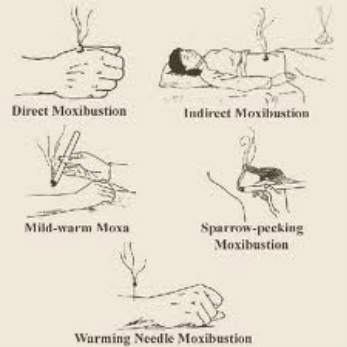 Moxibustion is a traditional Chinese medicine technique that involves the burning of mugwort, a small, spongy herb, to facilitate healing. Moxibustion has been used throughout Asia for thousands of years; in fact, the actual Chinese character for acupuncture, translated literally, means "acupuncture-moxibustion." The purpose of moxibustion, as with most forms of traditional Chinese medicine, is to strengthen the blood, stimulate the flow of qi, and maintain general health.

The picture on the right illustrates various ways to administer Moxa.
Gua Sha:

Gua Sha is an ancient Chinese healing technique. It is used to remove blood stagnation considered pathogenic, promoting normal circulation and metabolic processes. The patient experiences immediate relief from pain, stiffness, fever, chill, cough, nausea, and so on. Gua Sha is valuable in the prevention and treatment of acute infectious illness, upper respiratory and digestive problems, and many other acute or chronic disorders. It is used to intentionally surface petechiae to the skin by using a scraping technique in order to help detoxify the body and relieve pain.  The word “Gua” means to scrape, and the word “Sha” has two meanings.  “Sha” from a TCM point of view refers to the stagnant blood and qi that is blocking the meridian pathway, inhibiting proper flow of energy and blood. From a western medicine point of view, it refers to the fluids that contain metabolic waste that is congested in the tissues and muscles. “Sha” also refers to a series of reddish, minute hemorrhages that look like a red colored speckled rash called petechia that surfaces to the skin during and after the Gua Sha treatment. In this bodywork technique, a round edged tool such as a spoon is used to scrape the skin to release the stagnant blood and qi or “sha” to the surface of the skin and appears as a group of petechia. This may sound and even look bad, but it’s very detoxifying and cleansing for the body.  Gua sha is a great method to help your body release excess wastes and help bring in refreshing nutrients to your cells.
Cupping:

Cupping therapy is an ancient Chinese form of alternative medicine in which a local suction is created on the skin; practitioners believe this mobilizes Qi and blood flow in order to promote healing. Suction is created using heat (fire) or mechanical devices (hand or electrical pumps).
There is reason to believe the practice dates from as early as 3000 B.C. The earliest record of cupping is in the Ebers Papyrus, one of the oldest medical textbooks in the world, describes in 1550 B.C. Egyptians used cupping. Archaeologists have found evidence in China of cupping dating back to 1000 B.C. In ancient Greece, Hippocrates (c. 400 B.C.) used cupping for internal disease and structural problems. This method in multiple forms spread into medicine throughout Asian and European civilizations.
Electro acupuncture 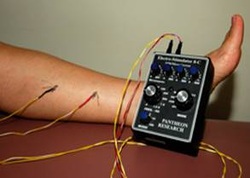 Electroacupuncture is a newer form of acupuncture where a small electric current is passed between pairs of acupuncture needles. Acupuncturists believe that this practice augments the use of regular acupuncture, can restore health and well-being, and is particularly good for treating pain.

Some scholars believe electroacupuncture was first used by physicians in France and Italy as far back as the early 1800s. Others attribute its discovery to Japanese scientists in the 1940s who were interested in making bone fractures heal more quickly. Still others claim that electroacupuncture wasn't really developed until 1958, when acupuncturists in China began experimenting with it as a form of pain relief.
Electroacupuncture is quite similar to traditional acupuncture in that the same points are stimulated during treatment. As with traditional acupuncture, needles are inserted on specific points along the body. The needles are then attached to a device that generates continuous electric pulses using small clips. These devices are used to adjust the frequency and intensity of the impulse being delivered, depending on the condition being treated. Electroacupuncture uses two needles at time so that the impulses can pass from one needle to the other. Several pairs of needles can be stimulated simultaneously,

Tui na (pronaounced twina) is a form of Chinese manipulative therapy often used in conjunction with acupuncture, moxibustion, fire cupping, Chinese herbalism, t'ai chi, and qigong. Tui na is a hands-on body treatment that uses Chinese taoist and martial arts principles in an effort to bring the eight principles of Traditional Chinese Medicine (TCM) into balance. The practitioner may brush, knead, roll/press, and rub the areas between each of the joints, known as the eight gates, to attempt to open the body's defensive (wei) chi and get the energy moving in the meridians and the muscles. The practitioner can then use range of motion, traction, and massage, with the stimulation of acupressure points. These techniques are claimed to aid in the treatment of both acute and chronic musculoskeletal conditions, as well as many non-musculoskeletal conditions. Tui na is an integral part of TCM and is taught in TCM schools as part of formal training in Oriental medicine
Powered by